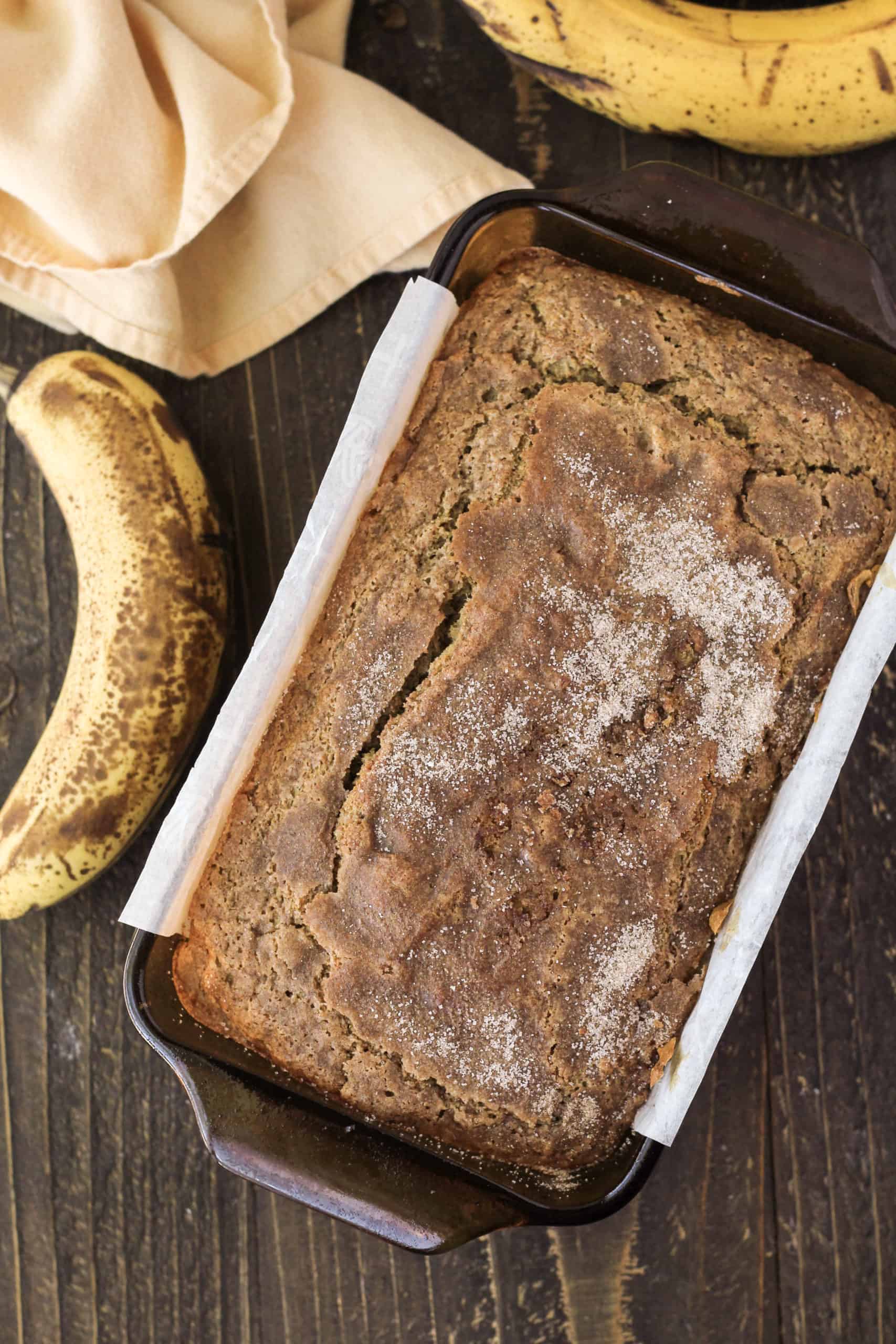 There’s a few food combinations that naturally grab a lot of people’s attention and get their mouths watering, like peanut butter and chocolate. But one of my favorite combinations that is entirely under-rated is cinnamon and banana. The warm flavor of cinnamon combined with sweet banana is heavenly.

And do you know when my favorite meal is? Breakfast. So let’s make some Cinnamon Swirl Banana Oat Bread shall we? 🙂

This Cinnamon Swirl Banana Oat Bread is moist, lightly sweetened with banana, filled with a light cinnamon sugar swirl, and made complete with cinnamon sugar sprinkled on top to create a cinnamon-y sweet top.

This Banana Bread is only made with ONE gluten-free flour: oat flour.

I absolutely love making homemade bread for breakfast, but I don’t love buying several different types of flours to create a delicious breakfast bread with. So, a while ago I rolled my sleeves up and got to work on perfecting a healthier, whole grain, gluten-free, quick bread recipe with ONLY oat flour (certified gluten-free) in it. I’d have to say.. I like it now more than working with an all-purpose gluten-free flour!

Many of my other quick bread recipes (such as my Zucchini Oat Muffins and Carrot Coconut Oat Muffins) are based entirely of oat flour.. my love of oat flour runs deep.

Oat flour is very easy to work with, and even easier to make, if you have the right tools. Simply grind up oats in a high powered blender or food processor for a few minutes and you have oat flour! You do want to make sure you’re left with finely ground oat flour, or else your bread will be more crumbly than you’d like it to be.

If you don’t have a high powered blender, then please buy oat flour from the store. It’s blended up very fine and is easy to work with.

And besides being easy to work with, oats are also a healthy, whole grain carb. They’re filled with fiber, vitamins, minerals and antioxidants; oats pack a punch to make any breakfast filling, hearty and healthy. 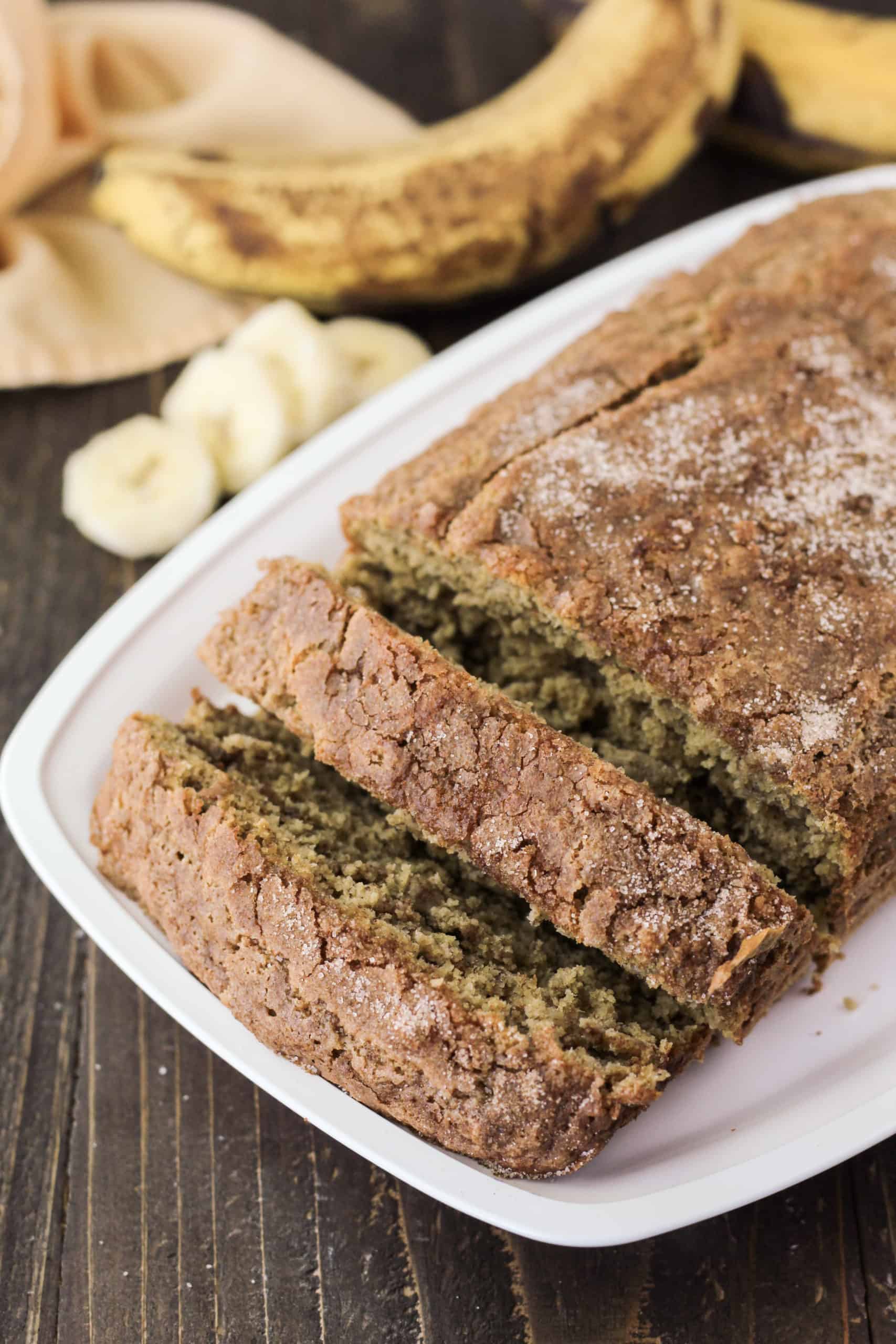 Okay, enough drooling over this Cinnamon Swirl Banana Bread. Let’s get to baking!

In a large mixing bowl, whisk together your coconut oil and mashed banana. While whisking, add your almond milk till well combined. Then add your vanilla and eggs and briefly blend them in.

To the same bowl, add your oat flour, baking powder, baking soda, salt, cinnamon and nutmeg. I love using nutmeg in banana bread. I think it rounds the flavor out more and adds a depth to it, rather than just cinnamon. If you prefer using just cinnamon, you can omit it.

While you wait, in a small bowl combine your sugar and cinnamon for your cinnamon swirl. Stir them together well. Smell them. YUM. 🙂

Now, are you ready to create that gorgeous Cinnamon Swirl?

Line a loaf pan with parchment paper, sticking out on both sides so you can easily remove your banana bread. It’s important to take your bread out in this way, rather than flipping it over upside down onto a plate, so that you don’t lose the cinnamon sugar you will sprinkle on top of the bread.

Now, scoop about half of your batter into the bread pan and spread it across the bottom into an even layer.

Next, spoon the rest of your bread batter into the bread pan in small doll-ups, across the top of your cinnamon sugar. Then gently spread them together in an even layer. This helps the cinnamon swirl layer to stay in one place. Then sprinkle the remaining 2 tablespoons of cinnamon swirl ingredients that were set aside across the top. 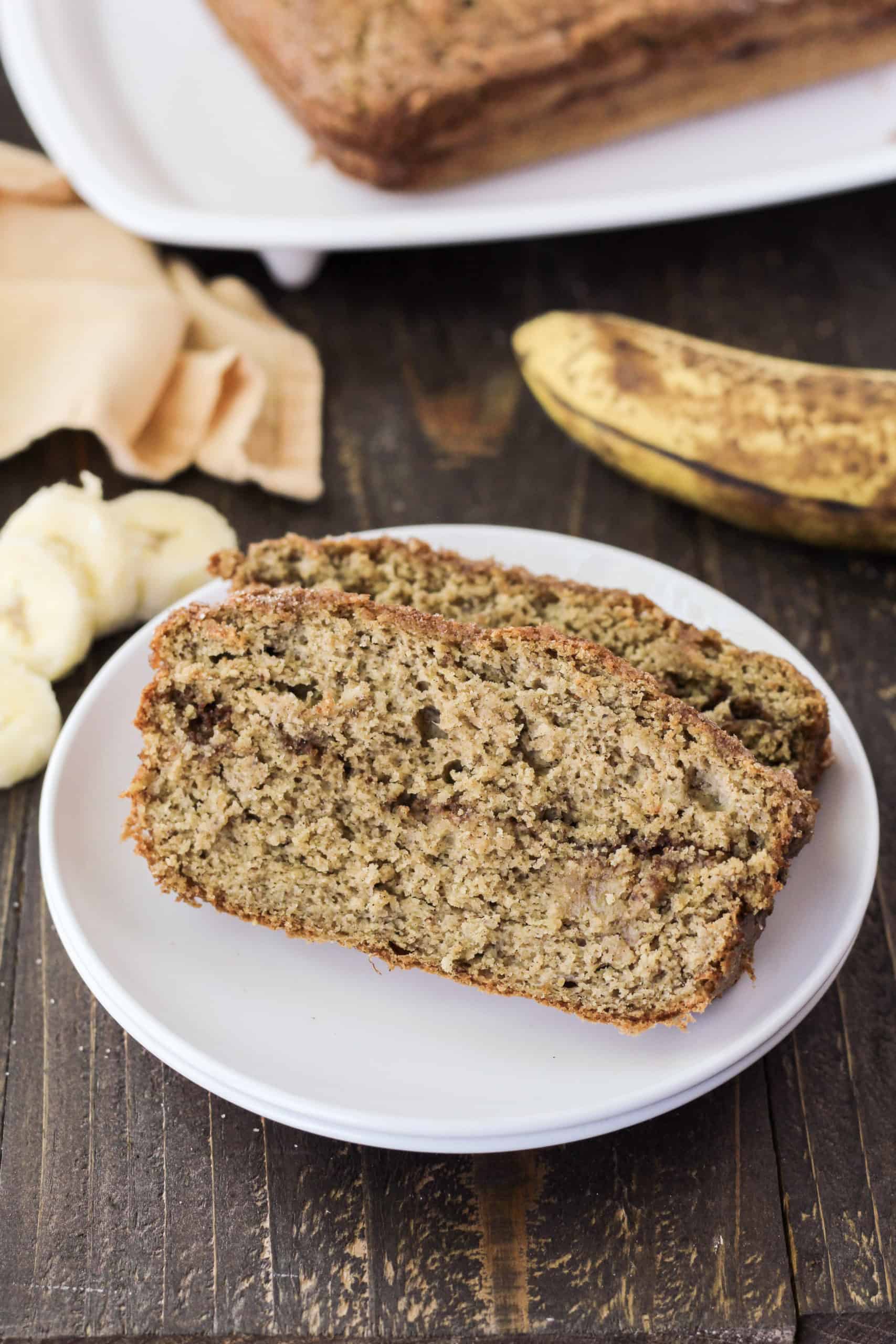 I really love this Cinnamon Swirl Banana bread as a healthy breakfast option because it’s so easy to make with only oat flour and only 1/4 cup of sugar in it.

Now, I must know: Are you a fan of cinnamon and banana too? 🙂 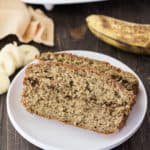 Due to the high amount of banana, I recommend storing this bread in the fridge so that it will last longer. It should last about a week this way.