The past few days have been slow and fast all at once – ever have days like that? Especially with a toddler and baby, the days can crawl by, but feel insanely fast at the same time. It seems like we’ve got more teething troubles from my baby girl, my toddler is up to his usual “WHY” shenanigans about everything I say, and my husband and I are holding our breaths about a possible work promotion for my hubs.

During times like these it’s SO easy to want to grab a bag of chips and eat HALF the bag. Stress eater, big time, right here. Instead, I made this Cinnamon Sugar Roasted Nut Granola. And man, it was a good choice. Only problem is that it’s just as addicting as eating half a bag of chips!!

This granola tastes like those roasted cinnamon sugar almonds you would get during the holidays. 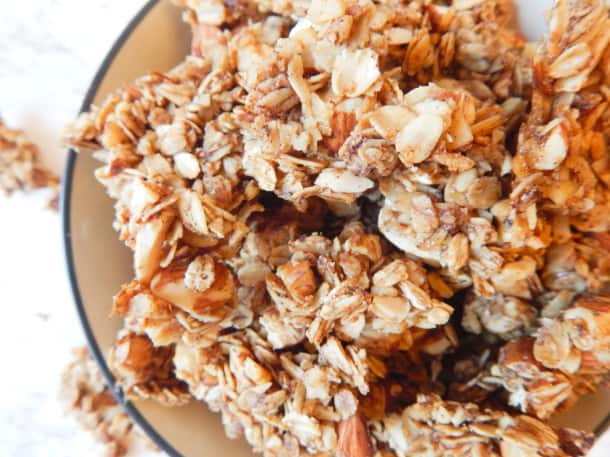 Filled with big, chunky clusters, you could eat this granola by the handfuls, as cereal, or on top of your favorite yogurt!

I’ve been craving a cinnamon sugar type of granola, since CINNAMON is my favorite, but none of my favorite granola recipes ever have enough cinnamon in them!

Okay, if I’m gonna be honest here, NOTHING ever has enough cinnamon in it for me. I’m constantly adding more cinnamon to recipes. Like I said, cinnamon is my favorite. I found out recently my Mom does the same thing, so it’s either a family thing, or people in general just never use enough cinnamon! I think some of both 😉

As I’m sitting here writing this post my baby girl is trying so hard to sleep, tossing and turning, and usually that’s the first sign that her teeth are bugging her for us; if she won’t sleep. Today, it’s going to be okay though. I think, as I became a parent, my patience was (and still is) being tested constantly.

As my patience muscle has grown leaps and bounds over the last three years, I’ve decided to shift my focus recently to a positive attitude and self-care. YES SELF-CARE. I know, it’s a big deal right now, everyone is talking about self-care. Ugh. People, just take care of yourselves right?! Easier said than done. Especially as a parent.

My favorite kind of self-care? A hot drink, a snack, and quiet.

To me, it seems like our society is recently obsessed with self-care and #treatyoself, but with the idea of still being healthy and learning more and more about our food at the same time. Life is no longer simply “we eat to survive” or “we eat whatever we want,” instead we eat to flourish, heal and work with our bodies, and yet still reward ourselves with decadence sometimes.

As a millennial, sometimes I think this balance is SO hard to find. But, it is the type of balance that I strive towards daily – to eat healthy so that the food I consume works for my body instead of against it, but still with the realistic expectation that some days I’m going to crave ice cream and it’s okay if I eat ice cream sometimes! That’s real life, for me. 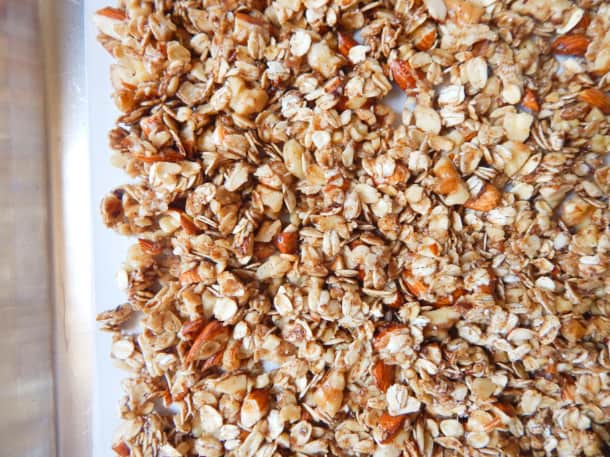 My favorite daily snacks for self-care and balance are almost always Greek yogurt in the mornings and a green smoothie in the afternoons.

Drizzle a little honey over the Greek yogurt, throw some of this Cinnamon Sugar Roasted Nut Granola on top, maybe with some chia seeds, and I’m in snack heaven. Greek yogurt is full of protein and gut-healthy probiotics.

But, guys, plain Greek yogurt can taste like sour cream, so you really have to jack it up to enjoy it (it’s an acquired taste!). That’s where balance comes in for me with my diet.

I’m not gonna sit there and eat plain Greek yogurt. Even though it’s great for your body and health, I don’t like it that way and I would never eat it like that again. It’s not realistic.

So, I jack it up. ALL the toppings. This Cinnamon Sugar Roasted Nut Granola on top seals the deal. Still healthier toppings (I’m not drowning it in chocolate syrup or anything!) but I’m giving it a mini-makeover.

For me, that’s balance. 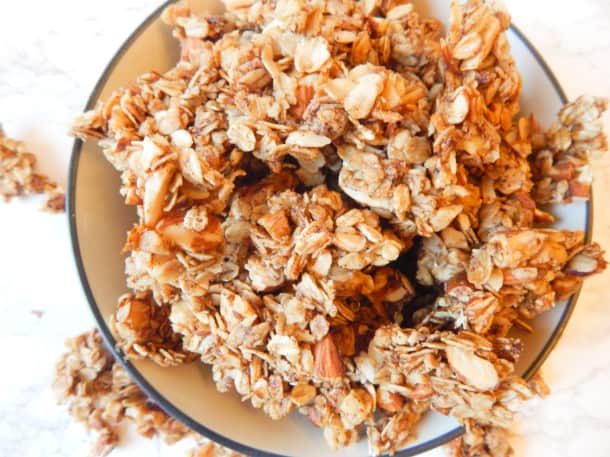 Man, this post got deep! If you thought you were just going to read about Cinnamon Sugar Roasted Nut Granola, sorry 😉 self-care and balance stole the show this time! The philosophy with how I approach my eating habits has been on my mind lately and now seemed like a good time to share it.

What do you do for balance? Self-care? Let me know in the comments, below!

And if you don’t have anything you do, maybe you should try and find something! For me, it keeps me sane. 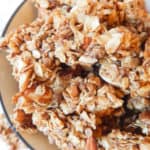