Have a hard time choosing between pumpkin and apple?! Then use them both! These Baked Pumpkin Apple Donuts are made with pumpkin puree, diced apple, and apple pie spices (like cinnamon, nutmeg and cloves). They’re fluffy and hearty, and covered in cinnamon sugar for the best Fall treat!

Fall is in the air here, so bring on all the pumpkin and apple recipes!

Both pumpkin and apple recipes are made with the warm cozy spices of Fall that we all love (like cinnamon, nutmeg, cloves, ginger, allspice, etc.).

Pumpkin is typically accompanied by pumpkin spice, which is often made of cinnamon, nutmeg, ginger, cloves and allspice.

Apple cinnamon recipes are accompanied by apple pie spice, which is made of cinnamon, nutmeg and cloves.

I love baking with both of them, so I figured I’d combine the two and the result is sheer magic.

These Baked Pumpkin Apple Donuts are fluffy and hearty, filled with pumpkin puree, diced apples, cinnamon, cloves and nutmeg. After they cool, they’re covered in a cinnamon sugar topping.

If you have only a little leftover pumpkin puree from another recipe, these are a great one to make too (you need just 1/4 cup of pumpkin puree!). Instead of letting that extra pumpkin puree go to waste.

Plus, they’re quick and easy to make, and made with simple ingredients. Keep reading for more tips and tricks to get the best Baked Pumpkin Apple Donuts.

First, to make these Baked Pumpkin Apple Donuts gluten-free, use a gluten-free all purpose flour blend. If you don’t need them to be gluten-free, simply use regular flour instead.

To make these donuts dairy-free, use coconut oil (or a dairy-free butter alternative) and almond milk (or something with a similar consistency).

Be sure to use pumpkin PUREE and NOT pumpkin pie filling.

They don’t have to be the most expensive jars. But, the $1 spices are not as strong and flavorful as the spices that cost ~$5. Trust me when I say, it’s worth it! I hear often from people that my baked goods are spiced so well. That’s because I spend a little more money on my spices, and it shows.

Which Apple to use?

I recommend using Granny Smith, fuji or gala. You can use whatever you have on hand. But, a tart and crisp apple gives you a better flavor and texture after baking. We got a load of wild apples recently and they worked really well in these (since they were so tart and crisp!).

These Baked Pumpkin Apple Donuts can be made healthier by using only 3 tbsp of maple syrup or honey (in place of the brown sugar in the donuts) or coconut sugar. You can also choose to omit the cinnamon sugar coating.

If you prefer, a donut glaze can be used instead of the cinnamon sugar topping. I would recommend using the glaze recipe from my Vanilla Donuts, and adding a little cinnamon (1/4 tsp or so) to it. It would also be delicious!

Want to go full on Pumpkin Spice Donuts instead? Instead of cinnamon, cloves and nutmeg you’ll use 1 tsp of cinnamon, and 1/8 tsp each of ginger, nutmeg, cloves and allspice. Omit the apple chunks.

Look at that pretty pumpkin color, bursting with apple chunks and covered in cinnamon sugar!

These Baked Pumpkin Apple Donuts are the best Fall treat. My spoiled kids inhaled them! 🙂 They’re hearty, fluffy, easy to make, and filled with some of the best spices.

After you make them, let me know what you think! Leave a comment and rating, below, and take a picture and share it with me on Instagram! I love to see what ya’ll make. 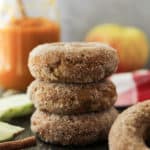 Stored in an airtight container these will last 1-2 days on the counter, and about a week in the fridge. Only do the cinnamon sugar topping prior to serving.