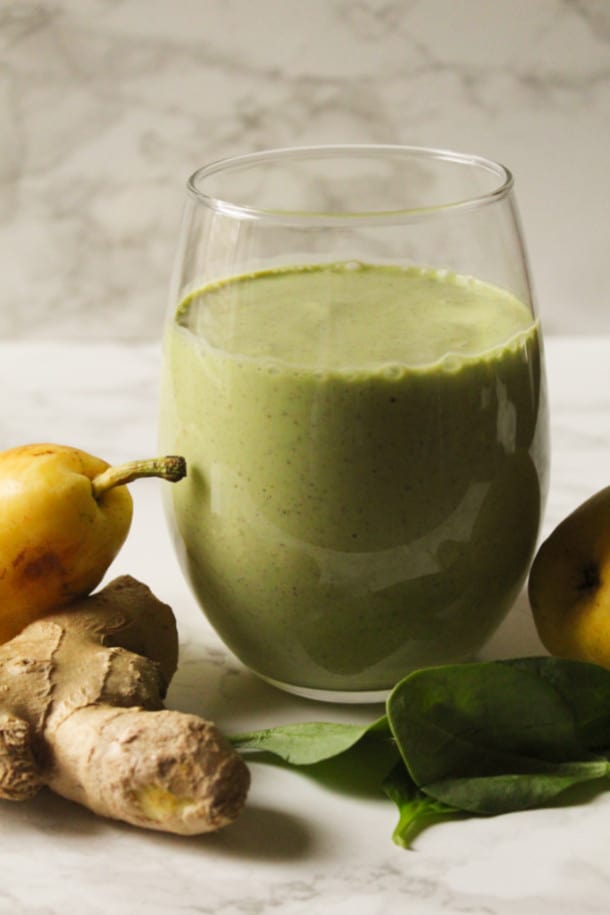 Sweetened with pear and a bit of honey, this Spiced Pear Green Smoothie hits you with a sweet cinnamon-y flavor and ends with a slight punch of ginger. Full of Greek yogurt, spinach and oats, this is the perfect healthy and filling breakfast smoothie (or snack) for Fall! 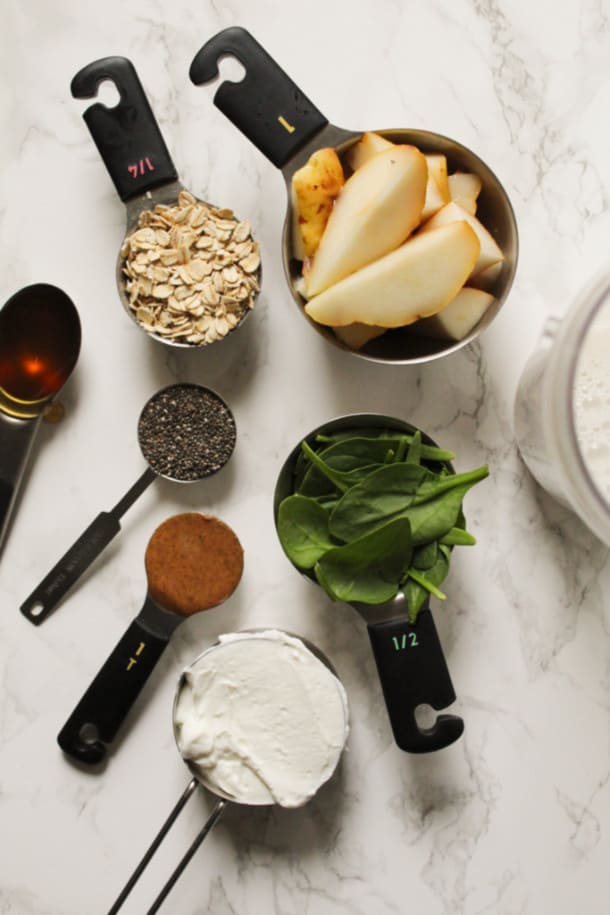 Do you ever get too much of fresh fruit and you aren’t exactly sure what to do with it?

I feel like that when it’s colder outside. During the summer it’s easy to munch on fruit around the clock, but fruit doesn’t speak to me as much when it’s chilly outside.

BUT GUYS, I love smoothies. Especially green smoothies! And you know what else doesn’t sound super appealing when it’s chilly outside? Yeah, you guessed it, a smoothie! 😉 Cause a cold drink doesn’t really warm you up and the flavors feel mismatched among all the apple cinnamon, pumpkin, etc.

I’ve heard of warm smoothies, and that whole idea just sounds crazy. Watch though – give me a few months and I’ll probably be posting a recipe for one on here! 😉 I like to try new food ideas often. It’s fun! For now though, warm smoothies are still on my list of “that sounds weird…” 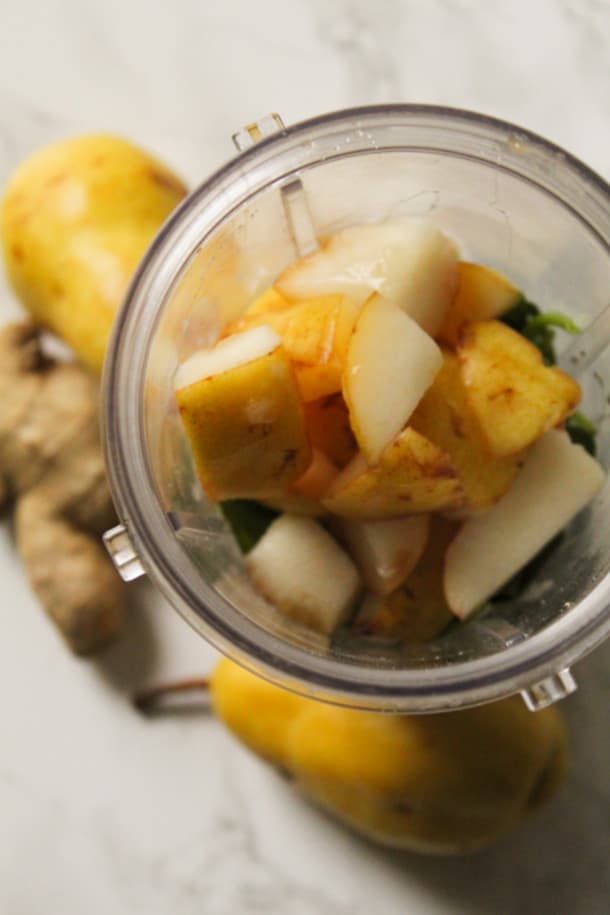 So how do you:

This smoothie is filled with cinnamon, nutmeg, and ginger, providing the perfect spiced ode to Fall. Complementing that perfectly is the sweet flavor of pear. Combined, it’s this sweet and spicy combo that is honestly, irresistible.

This Spiced Pear Green Smoothie is also filled with:

Add in a tablespoon of honey and some almond milk, and you have one delicious and super healthy, refined sugar-free, gluten-free, Spiced Pear Green Smoothie. 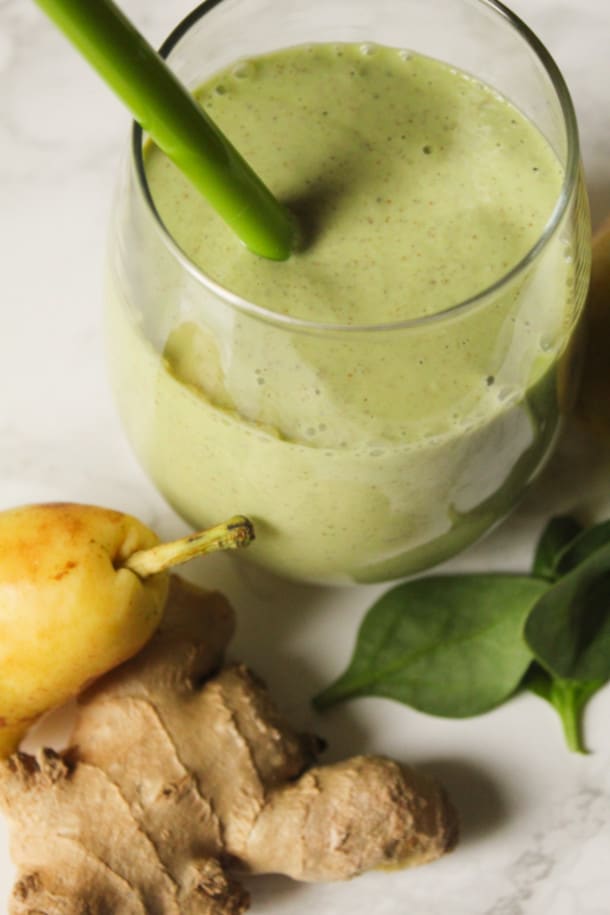 As for drinking a cold drink when it’s cold outside…

Have you ever eaten ice cream when it’s snowing outside?

Now, smoothies aren’t ice cream… But this Spiced Pear Green Smoothie is SO worth the chill; similar to ice cream.

Are you still a smoothie drinker or ice cream eater when it’s cold outside? Let me know in the comments, below! 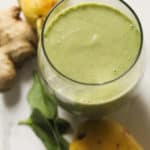 *I would recommend starting with less spices, so you can add more if the smoothie isn't spiced enough. 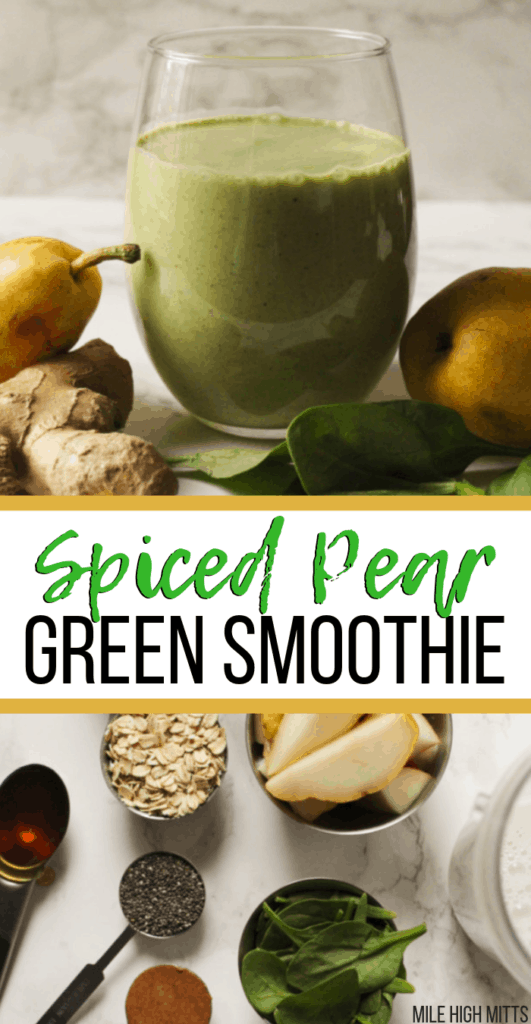