If Pumpkin Pie isn’t your favorite Holiday pie to make, say hello to this gluten-free Dutch Apple Pie instead! It has a flaky gluten-free pie crust on the bottom, warm, spiced sweet pie filling in the middle, and a crumble topping. You won’t be able to just have one slice!

I’ve talked about before how I didn’t grow up in a big pie-eating family (we prefer cookies). Since then though, I’ve nailed my favorite gluten-free pie crust recipe. And now, I really like pie!

I’ve learned there is just something about a slice of warm apple pie. And, of course, it’s 1000 times better if it’s homemade and your house smells like apple Heaven while it’s baking!

So I’ve taken my favorite pieces of different apple pie recipes, and made my own version of Dutch Apple Pie (gluten-free).

What is a “Dutch” Apple Pie? It’s simply an Apple Pie that has a crumb topping, rather than a pie crust on top.

My version starts with my simple gluten-free pie crust recipe, that’s quickly made in a food processor. It’s a pretty easy dough to work with (the best I’ve used so far, that’s gluten-free). After baking, it gives you those flaky pie layers that are oh so irresistible.

The middle layer of this pie is a sweet apple pie filling, complete with white and brown sugar, cinnamon and allspice (one of my favorite spices!). You’ll cook the pie filling a bit before putting it into the crust. Basically, this partially cooks the apples beforehand, which helps them hold their structure better (rather than getting too mushy while baking later).

You can use thinly sliced or chunks of diced apples. I prefer to use chunks, for a bit more texture in my pie! I swear it tastes a million times better this way (but my husband would disagree, as a traditionalist…).

Finally, this gluten-free Dutch Apple Pie is topped with a sprinkling of a crumb topping. It’s a little crunchy and soft, sort of like a topping for Coffee Cake. It adds just a little extra oomph to the pie, instead of having just more pie crust on top. Again, I think it’s even better than a classic apple pie.

Haven’t tried a dutch apple pie before?! Trust me when I say, it’s a must-have recipe!

Where to begin? Probably with the apples.

Like I’ve said, above, you can use either thinly sliced or diced apples (diced to about 1/2″ each).

What are the best types of apples to use? I recommend Honeycrisp, Granny Smith, and Braeburn. We used wild apples, and they worked beautifully. Basically, you’ll want to use a crisp apple that can withstand the cooking and doesn’t turn to mush.

For this gluten-free Dutch Apple Pie recipe, you’ll cook your apples on the stovetop with white sugar, brown sugar, cinnamon, allspice, salt, gluten-free flour, and cornstarch. Both gluten-free flour and cornstarch are ideal for thickening the filling properly, so you aren’t left with a soupy mess after baking. I do not recommend a substitute of any kind.

Your Crumb Topping and Pie Crust are both incredibly easy to make.

Don’t you love that?!

The gluten-free Pie Crust is a simple combination of a gluten-free all purpose flour blend, salt, butter and cold water. That’s it! Whip it up in your food processor for a super quick and totally addicting pie crust.

Lastly, the crumb topping can be made in a small bowl, while your apple pie filling cools a bit (don’t add your pie filling to the crust while it’s super hot and steamy still!). It’s a simple mixture of butter, sugar, flour and salt.

After sprinkling your crumble topping on top, you’ll bake your Dutch Apple Pie until bubbly. Let your pie cool till it’s just warm (not piping hot anymore!) and slice up a piece. Serve it with ice cream or whipped cream if you’d like. And enjoy the experience of a warm, spiced, sweet apple pie with a flaky buttery crust and crispy crumb topping.

Look at that gooey apple pie filling, that holds it’s shape but almost just melts in your mouth. This gluten-free Dutch Apple Pie is a yearly repeat recipe during apple season in our house!

After you’ve made it, let me know what you think! Is Dutch Apple Pie better than regular Apple Pie?! Let me know with a comment and rating, below, and/or find me on Instagram and tag me in your pie picture. 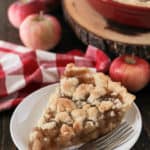 Pie can be covered and kept room temperature for 1-2 days, or stored in the fridge for about a week.