If you’ve never had Cinnamon Swirl Banana Bread you’re missing out! It’s classic Banana Bread with a thin layer of cinnamon sugar in between, taking Banana Bread to the next level. It’s one of our families favorite breakfasts!

Whether its a slice in the Winter or Summer, somehow it’s ALWAYS delicious!

I like to make it several different ways, to switch it up. Like Carrot Cake Banana Bread or Strawberry Banana Oatmeal Bread. Or, sometimes there’s different chocolate chips, different chopped nuts, or a cinnamon swirl in the middle.

I think Cinnamon Swirl Banana Bread is the best version though.

I always like to add a little cinnamon to my banana bread anyway, but adding a layer of cinnamon sugar in the middle is an easy way to up the flavor. We LOVE cinnamon sugar in our house (I think kids in general love it!). We even have a little salt and pepper shaker filled with cinnamon sugar… no shame. 😉

This recipe is on repeat here. It starts with my classic Banana Bread recipe. It can be made gluten-free, dairy-free and works well in high altitudes too. It’s filled with sweet banana flavor and brown sugar!

With a simple cinnamon and sugar mixture layered in the middle, it’s extra delicious.

It’s easy, classic, and everyone will love it! If you haven’t had Cinnamon Swirl Banana Bread yet, get to baking!!

Let’s talk about the ingredients first.

First, this bread can be made gluten-free with an all purpose gluten-free flour. You can also make it with regular flour instead.

To make this bread dairy-free, you can use coconut oil or a dairy-free butter alternative.

To make this bread in an altitude of 6-8,000 feet, reduce the baking soda to only 3/4 teaspoon. I bake at about 5,000 feet and the recipe works just fine for me with 1 teaspoon of baking soda. The banana helps to give the bread extra structure, which is great for baking in higher altitude.

The rest of the ingredients in this bread are simple, and probably things you already have on hand. Except maybe the bananas! Be sure to use those brown spotty, overripe bananas for the most banana flavor and the sweetest bread.

And for that Cinnamon Swirl…

All you have to do is mix together cinnamon and sugar. Easy peasy. Reserve one tablespoon for later, to sprinkle on top of the bread (if you’d like, it’s not a must-have).

To your loaf pan, you’ll add half of your banana bread batter and spread it into an even layer. Then sprinkle your cinnamon sugar mixture across the whole layer.

Then add the rest of your banana bread batter on top. You can pour it across the top of your cinnamon sugar mixture carefully. Or, you can use a spoon and add dollops of batter across the top. Then spread it out afterwards into an even layer. This will keep the cinnamon swirl in the middle of the bread, instead of accidentally mixing it into the top layer.

Lastly, sprinkle that reserved tablespoon of cinnamon sugar across the top. And bake!

Let it cool entirely before slicing. Then you can cut a few slices and marvel at the pretty cinnamon swirl line in the middle! I love it.

After you make it, let me know what you think. I love to hear from you all. Find me on Instagram and tag me in your picture, or leave me a comment and rating, below.

If you love baking quick bread, check out my Zucchini Bread, Apple Cinnamon Bread, and Pumpkin Bread (all with gluten-free and dairy-free options). 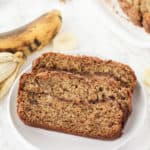 Stored in an airtight container in the fridge this bread lasts about a week.