Quick and easy, fluffy Banana Cinnamon Sugar Donuts are the best weekend breakfast or treat for families. If your kids love banana and cinnamon sugar like mine do, you’ve gotta make these!

Banana and cinnamon sugar are some of the best flavors.

My son goes absolutely crazy for anything cinnamon sugar. It’s gone in a matter of seconds.

We all LOVE banana and cinnamon sugar. I love baking with them too! They’re both incredibly cheap and easy ingredients, and to me they’re always in season.

Adding mashed banana to baked goods gives them the best texture… A perfect fluff factor! So, I use it often. Like:

…and that’s just to name a few of our favorites; we seriously love recipes with bananas.

So when I realized recently that I didn’t have my Banana Donut recipe online yet, I was shocked!

How did I miss this?! Banana in baked donuts is a dream! The texture is fluffy Heaven. It’s seriously so good. Of course, it’s a cheap, easy and healthy ingredient too.

So if you’re ready for a banana and cinnamon flavored, thick and fluffy donut… let’s do this!!!

First up, let’s chat about the most important ingredient here. You’ll want to use those super brown spotted, overripe bananas that are sitting on your counter.

If your bananas aren’t quite that dark yet, wait! It’s worth it. The darker they are, the sweeter your donuts will be.

You’ll see at the top of my picture, above, how dark brown the bananas were that I used. They were at the BEST baking stage, and I had been waiting impatiently (craving Banana Donuts!) all week. 🙂

After your Banana Donuts come out of the oven, let the pan cool for a couple minutes. Run a knife around the edges, to ensure your donuts will come out of the pan easily.

Flip the pan over, and dump your donuts out onto a cooling rack. While they cool, you can melt your butter and mix together your cinnamon sugar topping.

Next, I recommend using a brush to brush the tops of each donut with butter. Then, immediately place the donut into your bowl with the cinnamon sugar topping and move it around till it’s covered entirely.

Don’t put your topping onto your donuts till you are ready to serve them! Overnight, the sugar will soak into the donuts and they will no longer look all pretty coated in cinnamon sugar.

Other than banana, cinnamon, and sugar, these Banana Cinnamon Sugar Donuts are made with a few other simple ingredients that you probably already have on hand:

To make these Banana Donuts gluten-free, be sure to use an all purpose gluten-free flour blend (with xantham gum). If you don’t need them to be gluten-free, you can use regular white flour as well.

To make these donuts dairy-free, simply use coconut oil or a dairy-free butter alternative stick (like Earth Balance).

Instead of Banana Cinnamon Sugar, these donuts can be made with a vanilla, chocolate, or strawberry glaze on top. Or whatever flavor of glaze you’d like really (I’d like to try a peanut butter glaze next!).

You could also add mini chocolate chips to the batter, if you love banana and chocolate together.

And, you can go crazy with your favorite fun sprinkles too!

Thick, fluffy, gluten-free, dairy-free, Banana Donuts coated in cinnamon sugar… does it get any better for breakfast?! I don’t think so. 🙂

After you make these, let me know what you think. Leave a comment and rating, below, and/or find me on Instagram and tag me in your pic. I love to see when ya’ll make my recipes! 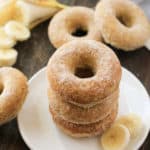 *Stored in an airtight container these will last about a day on the counter, or up to a week in the fridge.
*The cinnamon sugar topping will not last on top of the donuts, so I recommend only applying it just before eating.