Apple Pie Jam is all of the best flavors of apple pie, but in jam form! Packed with apples, brown sugar, cinnamon, allspice, and vanilla. This jam is perfectly spreadable for so many things and makes a great Holiday gift.

Have you ever had apple jam before?!

I hadn’t until recently. It sounded WEIRD to me. Because… apple jam? Isn’t that like applesauce… but with a weird texture?

Oh I was so wrong.

This Apple Pie Jam has all the flavors of your favorite apple pie, but in spreadable form! Add it to toast, muffins, quick breads, scones, pancakes, yogurt, etc.

It gives everything a wonderfully spiced and sweet apple flavor. And it isn’t like applesauce at all! It’s the same texture as any other Jam, that tastes like apple pie instead. Does it get any better?!

My husband brought home a ton of wild apples recently. Naturally, I’ve been sharing tons of apple recipes as a result. This Apple Pie Jam was one of my experiments after I found this recipe, but did my own adjustments to it.

My Apple Pie Jam has a combination of both pureed apples and apple chunks, for an apple jam that has finely diced chunks throughout. After all, it isn’t apple pie jam without some apple chunks!

Brown sugar, cinnamon, and a touch of allspice complete the flavor of apple pie. Allspice is what takes it to the next level, so don’t miss it!

After making your Apple Pie Jam, you’ll need to do a simple hot water bath to can each jar for preservation. I LOVE canning! I’m super excited to be sharing my first canning recipe on Mile High Mitts.

Roll up your sleeves, and let’s get to jam-making and canning!

To begin, to a large pot, you’ll add your apples and some water and simmer your apples till they’re just cooked through and soft, but not mushy. Afterwards, you’ll remove 4 cups of the diced apples and blend them. I recommend using a food processor or blender. I like to use my blender, and keep the spout open slightly for some of the steam to release while I’m blending.

You’ll add your blended apples back to the pot, and bring everything to a high heat. Sprinkle your pectin across the top and whisk it in (one tablespoon at a time is best). Once your mixture is boiling, you’ll add your cinnamon, allspice, and brown sugar.

Bring it BACK up to a hard boil (a “hard boil” is one that continues to boil while stirring and cannot be stirred down) and boil for one minute. Be careful, and use a tall wooden spoon and an oven mitt on your hand to watch out for any jam splatter.

Remove from the heat and ladle your Apple Pie Jam into your mason jars. I recommend using a wide mouth canning funnel, to easily get your jam in the jars (especially if you can often, it’s a game changer!).

Wipe around the rims of each jar (This is extremely important! If there is anything in it’s way, the lid won’t seal properly.) and add the lid. Lightly screw the rings around each jar, but not too tight.

It’s time to can in our water bath!

Carefully add the jars to your pot of boiling water, using a jar lifter is best (although I’ve very carefully used tongs in a pinch). There needs to be at least 1/2-1 inch of water covering the jars.

Boil the jars in the water bath for 10 minutes, or more according to your altitude and this chart. When your time is up, turn the heat off and let the jars sit for another 5 minutes.

You’ll know the jars have sealed properly when your hear the lovely canning CLICK that they make. Or, you’ll see the tops of your lids are pressed in and cannot move up and down (or you press it down, it clicks, and then it can no longer move).

After they’ve cooled the jam inside should be set. If you tip your jar to the side, it may move a bit (but will be plenty thick after refrigerated). And don’t forget to label the tops of your mason jars with “Apple Pie Jam” and the date.

We’ll be enjoying ours throughout the Fall and Winter, and giving them away as gifts to friends and family. Homemade gifts are seriously the best!

Who wouldn’t want Jam that tastes like apple pie as a hostess gift after a Holiday party? Or just give them to family and friends for a fun homemade gift!

After you’ve made your Apple Pie Jam, let me know what you think! I love to hear from ya’ll. Leave a comment and rating, below, and/or tag me on Instagram in the picture you post. 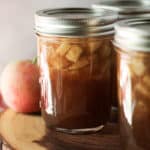 *One tablespoon is roughly 28 calories each.
*It’s ideal to store your jars in a cool, dark place. Canned jam tastes best if used in 1-2 years.
*You can also make this recipe without canning the jam in the water bath, and the jam will last a few months in the fridge.